RAID is short for Redundant Array of Independent Disks

RAID is a technology that is used to increase the performance and/or reliability of data storage. It combines multiple physical disk drive components into a single logical unit. Here we are discussing the the different types of RAID

Data in RAID is distributed across the drives in one of several ways, referred to as RAID levels, depending on the required level of redundancy and performance. The different schemas, or data distribution layouts, are named by the word RAID followed by a number

RAID 0 divides a set of data among multiple hard drives, usually two drives.This configuration has striping but no redundancy of data. It offers the best performance but no fault-tolerance.If one drive fails then all data in the array is lost. 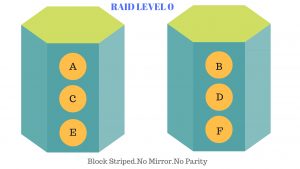 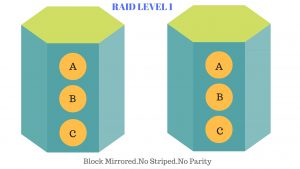 Level 5 is one of the most popular configuration of RAID and is the most common secure RAID level. It requires at least 3 drives but can work with up to 16. Data blocks are striped across the drives and on one drive a parity checksum of all the block data is written. The parity data are not written to a fixed drive, they are spread across all drives. 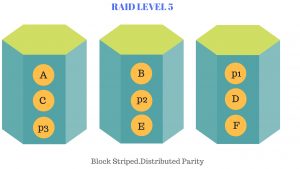 Provides block-level striping with parity data distributed across all disks. It requires at least 4 drives and can withstand 2 drives dying simultaneously. The chances that two drives break down at exactly the same moment are of course very small.This technique is similar to RAID 5.If a drive in a RAID 5 systems dies and is replaced by a new drive, it takes hours to rebuild the swapped drive. If another drive dies during that time, you still lose all of your data. With RAID 6, the RAID array will even survive that second failure. 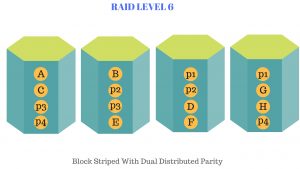 Combining RAID 1 and RAID 0, this level is referred to as RAID 10, which offers higher performance than RAID 1 but at a much higher cost. In RAID 1+0, the data is mirrored and the mirrors are striped.This is a hybrid RAID configuration. It provides security by mirroring all data on secondary drives while using striping across each set of drives to speed up data transfers. 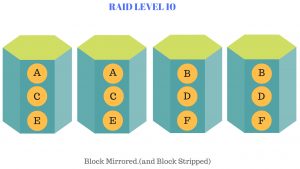 RAID is not a substitute to backup!

RAID improves the performance of the disk writing and data protection from disk failure except in RAID0. This doesn’t mean it can be used as a substitute to a backup solution. If a file is deleted or overwritten, we cannot retrieve it.

All RAID levels except RAID 0 offer protection from a single drive failure. A RAID 6 system even survives 2 disks dying simultaneously. For complete security, you do still need to back up the data from a RAID system.

We will get maximum disk space with RAID 0, because of the striping in it.  So at minimum cost, we will get maximum space. Since it doesn’t provide fault tolerance, it cannot be used for critical systems. It could never be used for databases unless you can withstand data loss or rebuild adequately from other backed-up media.

RAID 5 offers the best trade-off in terms of price and performance and includes data protection for database use.

Talk to our experts to get the best server helpdesk support, server management service, and more.

Please wait...
Want to be notified when our article is published? Enter your email address and name below to be the first to know.